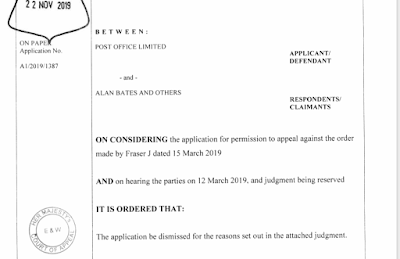 at November 22, 2019
Email ThisBlogThis!Share to TwitterShare to FacebookShare to Pinterest

LORD JUSTICE COULSON :
These are my Reasons for refusing PTA following an oral hearing on 12 November 2019. Although it is convenient to put those reasons in judgment form, this is not a judgment which can be cited in other cases and therefore has no neutral citation number.
1.General
2.Common Issue 1: Implied Duty of Good Faith (Grounds 2(a), (b) & (c))
Ground 2(a) Relational Contracts
Ground 2(b) Implication of the Duty of Good Faith
Ground 2(c) The Nature/Scope of the Good Faith Duty
3 Common Issue 2: Implied Terms (Grounds 3 and 4)
Ground 3(a) Contracts Not Relational
Ground 3(b) Terms Consequential Upon or Incidents of the Duty of Good Faith

Ground 3(c) Not Incidents of Good Faith
Ground 4 Necessity
4 Common Issue 3: Discretions and Powers (Ground 5)
Common Issue 16: Termination on Notice of the SPMC and the NTC (Grounds 6 and 7)
“911.  It is in relation to this part of the case that a light is shone on the way in which the Post Office is contesting parts of this litigation. One of the areas of dispute in this Common Issue is whether the Post Office is entitled to terminate the appointment of a SPM vindictively, capriciously or arbitrarily. That is denied by the Post Office; in other words, the Post Office argues that contractually it is entitled to act in this way. Although that is a surprising position, in my judgment it is also an obviously incorrect position. I have dealt already in this judgment with why that is so. Firstly, these contracts are relational contracts. Secondly, as stated by Lord Sumption JSC in British Telecommunications plc v Telefónica O2 UK Ltd [2014] UKSC 42 at [37], absence very clear words to the contrary, a contractual discretion has to be exercised consistently with its contractual purpose, and in good faith and not arbitrarily or capriciously. Thirdly, I have considered as a matter of construction the termination on notice provisions in both the SPMC and the NTC, and concluded on the words used, considered within the contracts at a whole and in accordance with their commercial purpose, how the power to terminate on notice should be exercised.“
6 Common Issue 15 Termination For Cause (Ground 8)
7 Common Issues 17 and 18 The ‘True Agreement’ Principle (Grounds 9 and 10)
8 Common Issue 14: Suspension (Grounds 11, 12 and 13)
Grounds 11 and 12 Suspension
Ground 13 The PO’s Own Breach
9 Common Issues 5 and 6: Incorporation (Grounds 14 and 15)
Ground 15 Notice
Ground 14 Onerous and Unusual Terms
10 Common Issue 7, 19 and 20: Substantially Different Performance /Reasonableness (Grounds 16, 17, 18, 19 and 20)
Ground 16 Standard Terms of Business
Ground 17 Substantially Different Performance
Ground 18 Reasonableness
Grounds 19 and 20 Particular findings re UCTA
Common Issues 12 and 13 Agency (Grounds 21 – 24)
Ground 21: Normal Principles of Agency Law (Accounts)
Ground 22  BTS
Ground 23 Helpline
Ground 24 False Statements
12 Common Issue 8: Liability Of SPMs For Losses (Grounds 25 and 26)
Ground 25 Construction of Section 12 Clause 12
“The sub post master is responsible for all loses caused through his own negligence, carelessness or error, and also for loses of all kinds caused by his Assistants…”
Ground 26 Assistants
at November 22, 2019
Email ThisBlogThis!Share to TwitterShare to FacebookShare to Pinterest
Newer Posts Older Posts Home
Subscribe to: Posts (Atom)