March 2019's High Court ruling prompted a pledge from the Post Office to "improve communications"* with its Subpostmasters alongside a touchy-feely assertion it had "started to listen, really listen"** to their concerns.

Behind the scenes, however, the Post Office was preparing to force through changes to some Subpostmasters' contracts without consulting them, leaving many people claiming they will be significantly worse off. 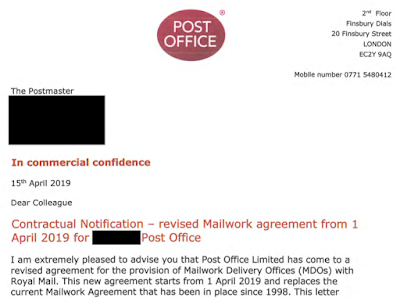 There are 11,500 Post Offices in the UK, of which around 450 are post and delivery offices, or SPDOs. The delivery offices attached to the Post Office are the responsibility of the Subpostmaster, but operated by Royal Mail staff. They're the sort of places people like me would go to collect an undelivered parcel.

On 24 April this year, five weeks after the Post Office was condemned by a High Court judge for its "culture of excessive secrecy" and efforts to "conduct itself as though it is answerable only to itself", a letter from Chris Howard, Post Office's "Remuneration Development Manager" landed out of the blue on the doormats of each of SPDO Postmaster.

"I am extremely pleased to advise you" it began, "that Post Office Ltd has come to a revised agreement for the provision of Mailwork Delivery Offices with Royal Mail."

The letter was dated 15 April, and the "agreement" was, in fact, a contractual change, backdated to 1 April this year. This is the first change to SPDO Subpostmaster remuneration since 1998, yet it came without warning and without the "agreement" of the Subpostmasters it affects.

Don't worry, though. According to the letter, discussions with the Post Office-funded National Federation of Subpostmasters (NFSP) about this pay, er, alteration; "ran alongside Royal Mail discussions to ensure we could obtain the best outcome possible."

So what changes are the Post Office attempting to enforce on Subpostmasters? Well, rather than base Subpostmaster remuneration on the number of Royal Mail employees operating out of their adjoining  delivery office, the Post Office are now paying Subpostmasters a flat fee for the existence of the delivery office, no matter how many Royal Mail staff are based there. It is also offering a transaction fee rather than a flat fee based on the number of P739/Mailswap items the SPDO handles on a monthly basis.
P739s are the "Something for you" cards which posties put through your door when you're out, often taken off your hands at an SPDO in exchange for a letter/parcel. Mailswaps are the letters/parcels a postie couldn't deliver to your house and so brings to the SPDO to store whilst they await collection via a P739 card.

Good news for the 85% of SPDOs who will see a net increase in their remuneration, right?

Not exactly. According to some Postmasters the estimates for the amount of P739/Mailswap products being routed through the SPDO are wildly optimistic.

One Postmaster did a bit of number-crunching when he saw the Post Office expected his branch to earn £931.84 a month from P739/Mailswaps. He wrote back to the Post Office:


"How on earth can you include this unaudited figure? This amounts to 3328 items at an average of 64 a week? Reality is nowhere near this close."

The new agreement also reduces the amount of money Royal Mail has to pay if it decides to close its delivery office (which you can bet will be happening at some SPDOs very shortly), and confers responsibility on SPDO Subpostmasters for keeping the delivery office clean and safe. This includes fire extinguisher maintenance, cleaning toilets, providing toilet paper and soap for Royal Mail's hard-working posties and paying for their PRS licence so they can listen to music while they work!


"You may have seen recent newspaper and TV reports about a legal judgment against the Post Office. We would like to reassure you this does not affect the products and services we provide to customers and our commitment to support and work with postmasters."

Rats are being smelled left, right and centre. As one correspondent to a Subpostmaster forum notes:


"The entire proposal appears to be a crafty way for Royal Mail to bring Postmen back into central sorting centres without paying you for loss of mailwork as per your contract. The practice of paying you for Postmen that have already been removed back to a central office is to end. This loss of income is most felt by the 15% of losers. But for those of you who look like winners... this seemingly increase to pay I believe will be short lived as I suspect Royal Mail will draw back Postmen into central sorting centres and you will lose the supervisory payment incrementally plus there will be no compensation to you other than for the last Postman to be withdrawn. [The P739/Mailswap remuneration] figure is a forecast and as someone has already pointed out POL's forecasts are somewhat exaggerated. All in all this appears to be the end of the Mailwork type of Post Office branch. These changes are designed as a cushion that will be gradually deflated so as to allow Royal Mail to depart with minimal cost."

Some SPDO Subpostmasters are spitting blood - not just at the contractual changes, which they believe either stiffs them now, or down the line - but at the way these changes have been visited upon them.

All in the best possible faith

One Subpostmaster, who estimates the contractual changes will result in a net loss to his business of £5000 a year, wrote back to the Post Office demanding redress:


"This contract has been served on me without the opportunity for me to pass comment, to seek a variance or indeed to seek advice before its implementation.... I received this revision on 25 April - some twenty four days after its inception.... It was agreed in a "discussion" with a body I am not a member of nor does it hold collective bargaining rights on my behalf."


"I reject totally your suggestion that the NFSP has somehow agreed to your proposals on behalf of myself. This organisation holds no mandate to enter into any such discussions\negotiations as to do so would represent third party inference in my Contract. The NFSP holds no collective bargaining powers or rights. Mr Justice Fraser in his Judgement set out very clearly the role of the NFSP and what they stand for. I resent any suggestion that they can or should act as a representative body for Postmasters. I require your urgent attention to this letter and confirmation that your proposals will NOT be implemented and I wish to place you on notice that I reserve the right to apply for an injunction to halt your actions if you ignore this letter. I will also be writing to Justice Fraser to inform him of your potential contempt for his Judgement."

The Post Office is unmoved. In a letter dated 15 May, Steve Utting, National Mailwork Manager writes:


"The recent judgment of Mr Justice Fraser did not remove Post Office's right to implement changes, nor did it require Post Office to consult with all postmasters before making changes... I would recommend that you obtain independent legal advice before taking any legal action... we consider the Mailwork variation [ie these contractual changes] to be binding on you."

For SPDO Subpostmasters who might go out of business if they lost their adjoining delivery office, the Post Office has had an idea. It might, might, agree to subsidising their branch with "exceptional" funding, but only if the Subpostmaster reworks and present a P&L statement to the Post Office which can then be discussed in their absence by the Post Office and the NFSP. Exactly how this begging bowl process might function is "still being worked through, and it may be some test cases will inform the final procedure."

I wrote to the Post Office to get their perspective on these SPDO contract changes and received the following.


"We negotiated a change with Royal Mail which benefits the vast majority of the postmasters involved through increased payments.  We also consulted with NFSP throughout the process and most of the feedback we’ve received has been positive.

"The vast majority of postmasters will see increases in their Mailwork payments as a result of the changes. We are monitoring the actual number of ‘Something for you’ cards processed by each Mailwork branch and making transition payments to support any postmasters who do not see an increase in their Mailwork payments under the new structure so everyone receives at least what they received under the previous agreement."

I suspect this statement will not satisfy some of those on the frontline. They have just had their business plans thrown up into the air by the Post Office without warning. The only "consultation" was with the NFSP, an organisation found by a High Court judge to be in the control of the Post Office.

This is unlikely to go away.


* On 15 March 2015, the day the Common Issues trial judgment was handed down, the Post Office chairman, Tim Parker said:

"Our postmasters are the backbone of our business and our first priority will be to consider the points raised about the management of our contractual relationships and how we could improve them... In addition, we will further improve communications with postmasters."

"We are... taking the judge's comments very seriously and they do make us realise we have to be a whole lot better.... I really care about getting things right for Postmasters... we have started to listen, really listen... going forward all of our plans are around how do we make things better for Postmasters... you're the backbone of our business and we really need to get it right.... We're also going to be improving our communication."

**************************
If you can, please help keep this crowdfunded public-interest journalism project going by chucking a few quid in the tip jar below. Contributors who give £20 or more will start receiving regular "secret" emails which have all the info and gossip about this litigation as it makes its way through the courts.
If you want to find out a little bit more about the underlying story, click here.
at May 28, 2019
Email ThisBlogThis!Share to TwitterShare to FacebookShare to Pinterest
Newer Posts Older Posts Home
Subscribe to: Posts (Atom)