The following piece outlines my understanding of the way the Post Office Horizon scandal has been documented in the media. It is necessarily incomplete, but it hopefully apportions credit where due. If I have missed someone or something important, or got anything wrong, please get in touch with me via the contact form (which should be visible in the right hand navigation bar on the desktop version of this website) and I will gladly make a correction.

The Post Office Horizon scandal was broken in Computer Weekly on 11 May 2009. The magazine had first been contacted in 2004 by Alan Bates (later to become founder of the Justice for Subpostmasters Alliance) and later by Bridlington Subpostmaster Lee Castleton.

Alan and Lee featured as case studies in the investigation, as did Jo Hamilton, the former Postmaster at South Warnborough in Hampshire. The piece also featured Noel Thomas, the Gaerwen Subpostmaster who was sent to prison after pleading guilty to false accounting.

The investigation took six months before it was ready to be published and was written by Rebecca Thomson. It was commissioned by Computer Weekly's then editor Tony Collins.

Tony Collins is an influential figure in this story - he wrote a series of articles for Computer Weekly about the 1994 Chinook crash on the Mull of Kintyre and he has long recognised that complex IT systems can be prone to throw up occasional catastrophic errors. He currently co-edits the Campaign 4 Change website where he writes about the Horizon scandal.

Computer Weekly, under the editorship of Bryan Glick, has continued to follow the story - building an impressive body of work over the last decade, much of it written by Karl Flinders, who has assiduously documented each new development. Karl and I spent many days in court during the Bates v Post Office litigation and he regularly scoops me, the swine.

In May 2009 a BBC Wales reporter, Sion Tecwyn, was quick to spot Noel Thomas’s name in Rebecca Thomson’s investigation. Sion and Noel knew each other from Noel’s time as a councillor. Sion ran a short TV news piece on BBC Wales Today which noted Noel’s appearance in Computer Weekly’s pages. It was framed in the context of an investigation by a respected technical journal which appeared to be calling into question the integrity of the Post Office Horizon system.

The camera operator working with Sion on that piece contacted Anna Marie Robinson and Bryn Jones at Taro Naw - a weekly half hour of Welsh-language current affairs, made by BBC journalists for S4C - and suggested it might make a good documentary.

Anna Marie and Bryn got to work. Their resultant investigation, broadcast on 8 September 2009 focused on Noel Thomas, Jo Hamilton and Alan Bates, but it also uncovered a further twenty-nine Subpostmasters claiming problems with Horizon.

BBC Surrey and BBC Inside Out

The first English-language broadcast investigation into Horizon took place on 7 Feb 2011. I took the story to my boss, Nicci Holliday, at BBC Surrey after I had spoken to Davinder Misra in November 2010. It didn't take long to find the Computer Weekly article or Alan Bates' website chronicling the launch of the Justice for Subpostmasters Alliance. Alan also told me about the S4C investigation.

Nicci put me in touch with Jane French at Inside Out South. Under her guidance I worked with Jenny Craddock and Jon Valters to put out a radio piece on my BBC Surrey breakfast show and a BBC1 South Inside Out investigation on the same day.

The Inside Out broadcast was seen by former Fujitsu employee Richard Roll and in 2015 he told me it was this which prompted him to come forward and tell his story to the Justice for Subpostmasters Alliance, and, later, Panorama. 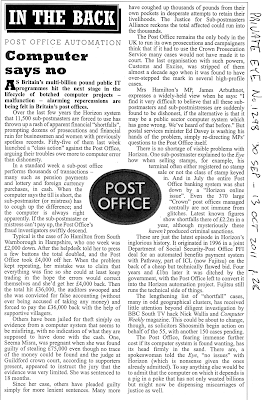 After making my first BBC investigation, I took the story to Private Eye where it was picked up by the Eye staffer Richard Brooks. Richard wrote his first piece in September 2011 (see left) and we have collaborated ever since. This culminated in our co-authored investigation for the Eye - Justice Lost in the Post - published on 1 April 2020, commissioned by Ian Hislop.

A number of newspapers have written stories on the scandal over the last eight years with the Daily Telegraph, Sunday Times, Financial Times and the Mirror all taking a keen interest, but the most consistent coverage has come via the Daily Mail. Neil Tweedie wrote a superb article in 2015, and since 2018, chief reporter Sam Greenhill and business editor Tom Witherow have captured almost every twist and turn of this story.

The Today Programme, PM, File on 4, BBC TV News, BBC online, the One Show, BBC Wales, local BBC TV and radio and Panorama have all covered this story since 2012. I have particular reason to be grateful to Jane French and Jane Goddard at Inside Out; Scott Solder, who allowed me to pitch the story to the One Show in 2014, and Andy Head, who was instrumental in getting both Panoramas commissioned in 2015 and 2020. Inside Out has continued to follow this story, with my most recent piece commissioned by Ingrid Kelly in January this year. A special mention needs to be made of Matt Bardo and Tim Robinson who put together both Panoramas. Tim also worked closely with me on a number of One Show investigations. Tim and Matt are exceptional journalists.

Finally, Bob Nicholson and David Prest at Whistledown Productions deserve a huge amount of credit. I took the story to David at Whistledown in May last year. His enthusiasm eventually led to Radio 4 commissioning The Great Post Office Trial earlier this year. Bob's brilliance as a producer and journalist is largely why the series sounds as good as it does.

Apologies if I missed some outlets, publications or people out. The main purpose of this piece is to credit Rebecca and Tony at Computer Weekly for breaking this story and those publications and outlets (mainly, I would say, CW, Private Eye, the BBC and latterly the Daily Mail) who have followed it closely.

To the best of my knowledge it is only the Today programme which has managed to interview any Post Office executive on the scandal in ten years - a collective failure of journalism, and an indictment of the publicly-owned Post Office's commitment to transparency and openness.

**********************
This blog is entirely funded by donation. You can donate any amount through the secure payment portal I have set up for this purpose (click here for more info or to donate).

If you contribute £20 or more you will be added to the secret email list. This alerts you to the latest developments on this story before they happen, as well as links to new articles and stories, whether posted here on this blog or elsewhere. Thank you for your support.