As well as telling me I couldn't have the Clarke Advice, on 3 Dec 2020, the Court of Appeal was also busy trying to decide whether or not Flora Page or Paul Marshall had been in contempt of court by disclosing the Clarke Advice to a journalist and the police.

At the end of the day it made an order requiring another constitution to deal with it and then, last week, it released a ruling stating that the proceedings of 18/19 November and those of 3 Dec were not, of themselves, contempt proceedings.

There are two careers hanging in the balance here, so I don't want to be flippant, but if they weren't contempt proceedings, what were they? The answer to this question might have a bearing on the progression of this situation, which, let's not forget, has cost three Subpostmasters their chosen representatives in court.

Here is the full ruling:

at January 22, 2021
Email ThisBlogThis!Share to TwitterShare to FacebookShare to Pinterest

Court of Appeal Ruling re access to the Clarke Advice 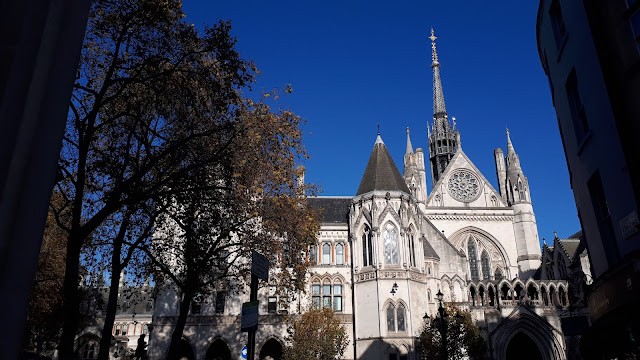 Late last year I made an application to the Court of Appeal to receive the Clarke Advice, described by Lord Falconer as a likely "smoking gun" in the Post Office scandal.

Brian Altman, QC for the Post Office in the current Court of Appeal proceedings, told the court the Clarke Advice revealed that:

"Mr Gareth Jenkins, an expert witness [for the Post Office] in many of the prosecutions may have failed to disclose information, that he was well aware of, that Horizon has bugs and errors in it.”

The significance of this document was such that when the legal team representing Seema Misra, Tracy Felstead and Janet Skinner received it from the Post Office, one barrister (Flora Page) sent it to a journalist and another (Paul Marshall) sent it to the Metropolitan Police, which is currently investigating two Fujitsu engineers (including Gareth Jenkins) over their role in the scandal.

The Post Office took exception to Ms Page's actions, which set in motion a chain of events, leading to both barristers stepping down from representing their clients. Mr Marshall has written to both Lord Justice Holroyde (who is presiding over this appeal case) and the Lord Chief Justice over the matter.

My application to see and report on the plainly important contents of the Clarke Advice was refused by the Court of Appeal on 3 December, but I only got the full approved written ruling telling me why this week.

The whole document can be found below, but the key paragraph is:

"In our judgment, neither a need to mention a document in order to raise a concern as to the possible impropriety of its being given to a press representative, nor a reference to a document in submissions to which its contents are not relevant, can be regarded as a reference to the document sufficient to necessitate its provision to a journalist or any other person with an interest in the case.  It would, in our view, be contrary to the proper conduct of proceedings if that consequence could be achieved by a party who had received disclosure of the document simply making it available to a journalist, especially when that is done in advance of a hearing on the basis that the party concerned will refer to the document at the hearing, and all the more so when the document in question has no relevance to the issues to be discussed at the hearing."

"there is at present no basis for granting Mr Wallis' application for access to a copy of the Clarke Advice.  The principles governing the provision of documents to journalists and to other persons who have a legitimate interest in proceedings, but who are not parties, do not at present require or permit the release of the Clarke Advice to Mr Wallis.  We emphasise the words at present.  The position may change as these appeals progress.  We emphasise that our decision today necessarily relates to the situation as it presently stands.  The court is not however prepared to allow anyone to jump the gun."

I asked Mr Marshall to give me his view on this ruling, and I also approached Mark Hanna for his view. Mr Hanna is co-editor of McNae's Essential Law for Journalists. He told me:

"The Court's ruling in respect of the Clarke Advice gives hope that this document will be released to the media later in the appeal proceedings, when the relevance of the document's contents becomes, as regards the reporting of what is said in court, beyond dispute.

But the ruling is disappointing, because in it the Appeal Court judges seem to view the concept of open justice as relating strictly to the reporting of the particular proceedings. But there is case law that the societal benefits of open justice include revelation of matters raised in court but beyond the scope of the issues in that particular hearing. The Appeal Court ruling does not set out clearly what risk of harm exists from allowing the Clarke Advice document to be fully reported now."

"Underlying the reasoning in the court’s ruling of 3 December are two a priori assumptions, unexamined and unargued.

The Post Office asserted (but did not establish) that the document is covered by an implied undertaking as a matter of law.  But the Clarke Advice is a document that tends to cast doubt on the safety of convictions of the appellants (that’s why it was disclosed). It is disclosed by the Post Office as prosecuting authority, post-conviction, not a private litigant. That is entirely different from the usual circumstance in which a party to, say, civil litigation gives disclosure of its private documents which they are entitled ordinarily, as of right, to keep to themselves.

In civil litigation there is an implied undertaking of the kind identified by the House of Lords in Harman v Secretary of State for the Home Department (now codified under the rules of civil procedure). The quid pro quo is that as a consequence of being involved in litigation the documents disclosed under compulsion are protected in the use to which they may be put. That has no application whatever to the present appeals.

There is no similar countervailing right of a prosecuting authority to withhold documents that cast doubt on a conviction.

The second assumption (asserted but not established) is that the document was covered by legal privilege.

But the assertion of privilege in the Clarke Advice would have been a ground for it not being disclosed to the appellants at all. Not only was the document disclosed, which ordinarily results in loss of privilege, but the terms of disclosure expressly provided that documents that met the criteria for disclosure would be disclosed even if privilege might otherwise have attached – a provision that is not referred to in the court’s judgment.

The question remains, had the Clarke Advice been disclosed to appellants before these appeals as a document that cast doubt on the safety of their convictions, on what possible basis could it have been said that the appellants would have been inhibited from going to the press about it? The Post Office could scarcely have been heard to say ‘we’ll let you have this document that casts, or may throw, doubt upon the safety of your convictions - so long as you don’t tell anyone about it and only if you use it for an appeal’.

Any such restriction would likely have engaged rights guaranteed under Article 10 of the ECHR. In short, the judgment, unsatisfactorily, raises more questions than it answers.  Further, assumptions of the kind made are a questionable basis for displacing the principle of open justice identified in Cape Intermediate Holdings."

I hope the contents of the Clarke Advice, and both the CK Sift Review and the Altman Review which it spawned (see my oral submission to the Court for more on that) are made public sooner rather than later. Furthermore, I hope the decisions that were made by the Post Office and the government in the light of the information those documents contained are also fully exposed.
The full ruling is embedded below or can be read here on Scrib'd:
Court of Appeal ruling on Clarke Advice application by the media by Nick Wallis on Scribd