EXCLUSIVE: Court of Appeal invites Post Office lawyers to have another go 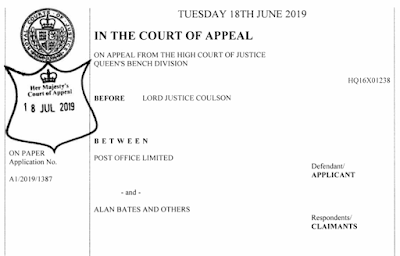 The Post Office's application to appeal the judgment of the Common Issues (first) trial in this litigation has been thrown back at them by the Court of Appeal on grounds of excessive length.

In his comments, Lord Coulson accepts a skeleton argument longer than normal may be acceptable because Sir Peter Fraser's initial High Court judgment was a whopper (180,000 words, kids - read the bluffer's guide here), "but," declares the judge, "that could not on any view justify going beyond fifty pages."

Accordingly, the Post Office has until 4pm this Friday to lodge a skeleton argument which is fifty pages long. If this does not happen, writes Coulson LJ - drawing himself up to his most thunderous height: "the application for permission to appeal will be refused."

As such, I expect there will be some litigation lawyers burning a decent hole in the Post Office's cash mountain over the next few nights to get that skeleton in. If they don't, the first trial judgment stands.

It would be weird if March's historic judgment did fail to reach the Court of Appeal on the basis of an administrative oversight, but I'm sure stranger things have happened.

Assuming the Post Office's considered fifty page skeleton is lodged before the end of this week, the JFSA have until 4pm on Friday 12 July to make their submissions, which his Lordship has demanded be no more than ten pages in length.

Rowing back from all this scheduling drama, I had this week been hoping to find out what the Post Office's grounds of appeal actually are, but I guess I'll have to wait a while longer.

There will be no summer expedition

In the same document (dated 18 June 2019, but stamped 18 July 2019) as the rejection of the Post Office's first skeleton, we discover the Post Office's request that its application be expedited (ie decided sooner rather than later) has also been refused. Coulson LJ says there is "no basis" for this argument in the skeleton and the application for expedition itself is based on a "false premise."

The Post Office had obviously hoped to get a decision on their application well before the arrival of the Horizon trial judgment (to what advantage for them I have no idea), but Lord Coulson is having none of it, ruling:

"It is a safe assumption that [the Horizon trial] judgment will not be handed down until September/October at the earliest. The answer to the application for Permission to Appeal the Common Issues can (and will) be provided before or at the same time."

This in itself is interesting, as it gives us a slightly firmer timescale going forward:

We now know that after Tuesday 2 July's conclusion to the Horizon trial, nothing will happen before the autumn. Then, in pretty short order, we will find out whether parts or all of the first trial judgment will go to appeal, get the Horizon (second) trial judgment and witness the start of the third (breach) trial.

Normally this sort of activity would almost guarantee Bates and others v Post Office would be one of the biggest stories around. However, 31 Oct is a significant date this year, and not just because you might be hosting a Hallowe'en party.

*******************
If you can, please help keep this crowdfunded public-interest journalism project going by chucking a few quid in the tip jar below. Contributors who give £20 or more will start receiving regular "secret" emails which have all the info and gossip about this litigation as it makes its way through the courts.
If you want to find out a little bit more about the underlying story, click here.
at June 24, 2019
Email ThisBlogThis!Share to TwitterShare to FacebookShare to Pinterest
Newer Posts Older Posts Home
Subscribe to: Posts (Atom)