There were jubilant scenes outside the Royal Courts of Justice today as 39 Subpostmasters' convictions were quashed by the Court of Appeal.

The panel of three judges said the Post Office had "steamrolled" Subpostmasters, and:

"effectively sought to reverse the burden of proof: it treated what was no more than a shortfall shown by an unreliable accounting system as an incontrovertible loss, and proceeded as if it were for the accused to prove that no such loss had occurred."

The judges also noted that the interventions of the barrister Simon Clarke, which spelled out to the Post Office that the shredding of documents was not okay, suggests:

"there was a culture, amongst at least some in positions of responsibility within POL [Post Office Limited], of seeking to avoid legal obligations when fulfilment of those obligations would be inconvenient and/or costly"

Immediately outside court Seema Misra exclaimed: "I'm not a convicted criminal anymore! I'm so grateful and so thankful to everybody - especially to the court - to see justice."

The 39 convictions were quashed on:

Ground 1: "that the reliability of Horizon data was essential to the prosecution" and "it was not possible for the trial process to be fair" and

Ground 2: that the evidence shows "it was an affront to the public conscience for the appellants to face prosecution"

This now brings the total number of Subpostmaster convictions quashed by the court to 45 - six were overturned at Southwark Crown Court last December.

Appellants who had travelled many miles and campaigned for many years came together and told the waiting media of their joy, relief and bittersweet satisfaction at the verdict.

Janet Skinner, who along with Seema and Tracy Felstead demanded an opportunity for all appellants to have their appeals considered on both the above grounds, explained why she thought it was important:

"We decided we had to fight it - we needed to prove it was an affront to the public conscience and we did. We smashed it!"

Rubbina Shaheen, who ended up homeless, living with her husband in a van after being released from prison said: "I'm over the moon and excited. Very very excited." When the judgment was handed down she said she "couldn't believe it at first. I was in tears."

Mohamed said "Our life was totally destroyed. Rubbina went through more hardship than I did, she is now on kidney dialysis which is all caused through stress. And now we want to more forward, hopefully, and try and recoup our losses."

"We're going to be seeking aggravated and exemplary damages because of the conduct of the Post Office... these are just decent folk going out to earn a living and to have a knock on the door one day and be accused of being dishonest, put in a position where they couldn't mount a defence - there was a calculated crushing of them and their ability to assert their innocence."

This is the full list of Subpostmasters whose convictions were overturned:

Three Subpostmasters - Wendy Cousins, Stanley Fell and Neelam Hussain - whose referrals were contested by the Post Office, failed to get their convictions quashed. The reason given was that Horizon IT evidence was deemed as not being central to their case.

It was an emotional day for everyone involved in the Subpostmasters campaign for justice - a brief moment of celebration in what has been an unlikely and incredible journey. There will be many more stories to come.

at April 23, 2021
Email ThisBlogThis!Share to TwitterShare to FacebookShare to Pinterest

I asked for anyone who had them to get in touch with photos of the post-judgment celebrations. I am posting them below with thanks to everyone who contributed. Please don't copy and re-use these without permission as the owners have kindly given them to this website to use here only.

If you have some photos taken outside court, at a pub nearby or from home as your victorious appellant returned, and you don't mind sharing, please get in touch - I'd be delighted to add them to this gallery.

Also please forgive me if I have missed, or misspelled or got a picture caption wrong - please let me know and I'll correct it! 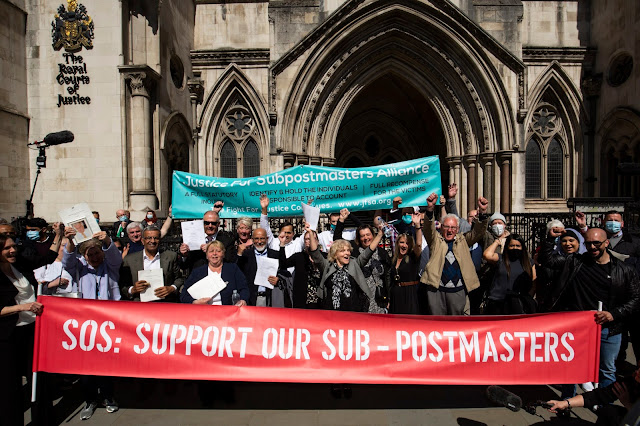