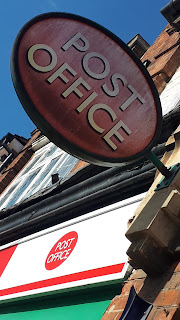 It is a massive shame it has taken so much taxpayers cash to get here.

It is borderline pathetic that the only reason we are here is because of a campaign by a few committed individuals and ten million-plus quid which has been chucked at a bunch of undoubtedly talented lawyers.

What we saw in the witness box today was two ordinary joes from the Post Office talking relatively freely about the way their organisation operates.

You can read the blow-by-blow tweets from Day 6 here.

The first witness was Nick Beal, Head of Agents’ Development and Renumeration at Post Office, the second was Paul Williams, Restrictions Advisor for the Post Office.

I have been told (and I don't set any store by this) that one of the problems with the Post Office is the people who are there stay there. As a result, very little fresh blood comes in at any level, and the way things are done, remains the way things are always done.

Mr Beal started his employment at the Post Office as a counter clerk in 1987. Mr Williams started his employment with the Post Office, also as a counter clerk, in 1979. Now - don't get me wrong, there is nothing wrong with being a lifer. Terry Wogan, at his Radio 2 leaving lunch said "the British have a tendency to confuse longevity with merit". It was a joke.

Mr Beal and Mr Williams cross-examination was conducted by the dashing Patrick Green QC, and it  offered up extremely useful insights into the way the Post Office operates.

Over the course of 5 hours today Mr Green made several points. I'm going to pick out three and I'd like to deal with the first two together. This is what I felt was the broad thrust of Mr Green's arguments:

a) The contract Subpostmasters have with the Post Office is weird. It is a sort-of freelance, sort-of employment, sort-of agent, friends-with-benefits kind of deal, which is all touchy-feely-buying-into-the-family-kind-of-vibe at the outset.

b)  The obligations of the Subpostmasters under the various documents they are given before they sign up to the job, as they take over the job and as they try to keep on top of the job are many, varied, confusing and all legally enforceable.

Both Mr Beal and Mr Williams were candid on this - there is a lot of fluffy bumf around for potential Subpostmasters when they are looking to sign up (let's call it the "courtship" phase), and there is a lot of quite serious stuff that some of them may or may not get to see (once they get into the "operational" phase) but when things are going well, both the Post Office and their agents work hard to do the right thing by each other.

He was confident in his department and he was very clear that Alan Bates, who is the man behind this group litigation, would have got his contract (Mr Bates denies it).

By the time Mr Bates was hired, says Mr Williams, it was standard practice to send the contract out with the usual stuff and, being a 114 page document, it was not the sort of thing you would miss from a pack you are sending out. Although Mr Williams didn't personally send Mr Bates his contract, he was sure his staff would have sent him his contract.

Mr Green, for the claimants, probed and pushed with both Mr Beal and Mr Williams and there were times Mr Beal didn't know or couldn't remember why things were like they were. There were also times Mr Williams was quite candid in saying things could have been better. I get the feeling that Mr Green was saying: "it's a bit confusing and disorientating when you look at all these terms and contracts for everyone - and you guys are the experts!"

He landed some blows, but not many. Both Mr Williams and Mr Beal came across as people who wanted to do the right thing at all times.

The National Federation of Subpostmasters, once an actual trade union, now described as an independent organisation, is anything but. It is wholly in the pocket and pay of the Post Office and it is contractually obliged not to do or say anything which could do anything "materially detrimental to the Post Office".

Mr Green cited the NFSP's grant funding agreement, which did away with membership subs and made the NFSP dependent on the Post Office for its existence. The strings are not hidden. This is from the Grant Funding agreement posted on the NFSP website.

5.3  The NFSP shall not engage in the following activities or behaviours:

In court today Patrick Green reminded Nick Beal that the Post Office has described the claimants' litigation (in its skeleton argument) as an "existential threat" to the Post Office's business mode.

He asked: "does this action fall under the terms of [the NFSPs] Grant agreement?"

Mr Green asked "so the NFSP cannot support this litigation because of the terms of your Grant?”

Mr Beal did not know.

Mr Green carried on in this mode for some time. Eventually the judge, Mr Justice Fraser said (and I paraphrase).:

"Mr Green, whether your point is that the NFSP are contractually prevented from supporting this litigation, or because they’re being paid too much money by the Post Office to not support it, you’ve made your point."

I've made my own comments on this issue in a separate blog post.

There were a couple of procedural moments of interest. In the morning session, Mr Patrick Green, QC for the claimants, mentioned in passing he had been disclosed some important documents by the Post Office the previous evening. The judge stopped proceedings to query this.

Just before lunch, the judge asked about this situation again. He asked Mr Green when his legal team requested the documents, what they were, how many they were and when they were disclosed.

Mr Green said it was 350 pages worth of documents, disclosing 45 different email chains.

The judge bridled (he has given numerous warnings to both parties about the methods they are employing to conduct this litigation).  In what I would describe as a very firm manner, Mr Justice Fraser said he was not prepared to deal with a case of this importance in which obviously necessary documentation was being disclosed so late. It was not acceptable.

He then ordered a witness statement from the Post Office solicitors to be given to him by 4pm tomorrow explaining why it took so long to disclose the documents. I expect Womble Bond Dickinson can adequately explain the delay and look forward to putting their explanation to the judge, in the witness statement.

And the end of the day the judge moved on to the dread reality of a third trial in this case. He is pushing for it to happen before the summer. Both the claimants and the defence QCs want it after summer because they want to go into a "mediation phase" after the Horizon trial (confirmed as beginning on March 11 for 5 weeks). Now I don't specifically know what this mediation phase involves (ie who will be mediating what and on what grounds) but the QCs seemed to think the amount of time required to make it successful could push the third trial into September next year.

The judge was not taken by this and noted 5 June as a good date for the third trial. He suggested this trial might be on the individual circumstances of a few ("less than six, possibly just two") claimants, not necessarily even those who are lead claimants in the current trial. The judge suggested this would allow markedly less prep time that the Common Issues trial (the current one) and the Horizon trial (March 2019). The less prep time, the more mediation time.

The QCs weren't keen. This idea of mediation and its timing (after two trials...?) is new to me so I will try to find out more.

That's me done for the next three days. There is no court sitting tomorrow, and I have managed to find gainful employment elsewhere. If you like these blog posts and emails, please consider chucking something into the paypal tip jar at www.postofficetrial.com

at November 15, 2018
Email ThisBlogThis!Share to TwitterShare to FacebookShare to Pinterest

This is the unperfect transcript of the sixth day of the Common Issues trial in the Bates and others v Post Office group litigation. The hearing below took place on Thu 15th November 2018 in court 26 of the High Court's Rolls Building. The claimants' QC is Mr Patrick Green and the defendant's QC is Mr David Cavender. The managing judge is Mr Justice Fraser.