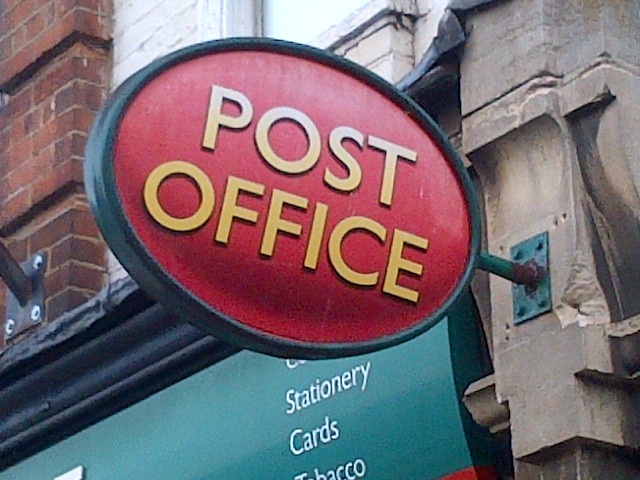 These figures are new and off the scale. The Post Office is reviewing around 900 prosecutions since the rollout of Horizon "which may have relied on Horizon data".

This is one of the single biggest developments in the entire Post Office story and I think it will lend weight to the voices of those who are demanding a full independent inquiry into this scandal.

Furthermore, I have been given information by the Post Office which reveals for the first time that there is a significant difference in the number of prosecutions and convictions of Subpostmasters in the pre and post-Horizon years.

The new information about the 900 prosecutions appears to have been prompted by a Freedom of Information request I made on 9 April this year (the Post Office links to it in their press statement). I asked for the total number of prosecutions by the Post Office and subsequent convictions since 1990.

My FOI request came on the back of the revelation, made to me on 3 April 2020 and published in the Daily Mail on 11 April, that the Post Office was reviewing 500 convictions on top of the 61 cases being examined by the Criminal Cases Review Commission (39 of which have already gone to the Court of Appeal).

As well as being staggered by this number, I realised it meant the information previously made public by the Post Office in response to other FOI requests was incomplete.

"How many subpostmasters have had charges filed against them for false accounting and inflating figures and or theft? Since 2010."

I am enormously grateful to Ms/Mr de Gaia for asking for these figures. They clearly show that around the time of the Second Sight investigation into Horizon, someone, somewhere realised the Post Office might be massively over-prosecuting dozens of people every year. The above figures were used in court during the Bates v Post Office group litigation and have proved enormously valuable journalistically, but they don't tell the full story.

A month after the de Gaia FOI another request, this time from a Tony Williams, was put to the Post Office requesting: "the number of Subpostmaster suspensions, reinstatements and prosecutions between 1990 to 2010."

This is a crucial question, as it would show whether or not there was an uplift in prosecutions after the advent of Horizon. The Post Office's response, on 12 October 2016, was incomplete, and, as we will see, incorrect.

The table supplied stated the following: 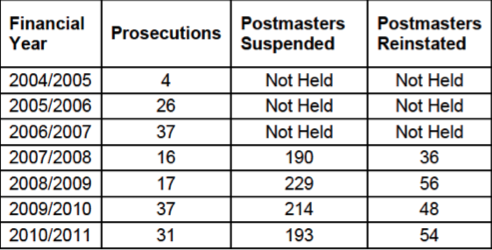 The prosecution column allows us to add to M de Gaia's request and look across the total number of prosecutions of Subpostmasters from 2004/5 to 2016/7. That total is 251.

I realise 251 prosecutions over a twelve year period is a huge amount, and perhaps it should have been flagged up by people like me sooner, however the figures most journalists fixed on were the 35 cases being reviewed by the Criminal Cases Review Commission in the years between 2015 and 2019 and the 550 claimants who subsequently took the Post Office to the High Court (of whom only 74 were criminally prosecuted).

The crucial thing to note about the above figures is that they only relate to prosecutions, not convictions. Of course, any prosecution is deadly serious. It has been made quite plain to me by Sue Knight, Sarah Burgess Boyde, Nicki Arch and many other Subpostmasters that even without a conviction a criminal prosecution can completely ruin your life. And with regard to the figures above, you would assume that the majority of prosecutions would result in convictions. I have no idea what I'm making that assumption on - perhaps the idea that the CPS, or the Post Office would only prosecute on strong evidence.

This is why the figure which was given to me on 3 April is so staggering - because it related to convictions - "around" 500 of them since 1999.

Doing the number-crunching, if we assume every single prosecution between 2004/5 and 2016/7 - 251 - resulted in a conviction (which we know it didn't), that meant between 1999 and 2003/4 the Post Office secured the conviction of at least 249 Subpostmasters over a four year period. Wow. More than one a week.

This is either uncovering criminality on an industrial scale, or the criminalisation of a significant number of people without, as far as I can see any audit, scrutiny, independent oversight or review.

The latest revelation - currently going out on the Today programme as I write - that the Post Office is now reviewing "around" NINE HUNDRED criminal prosecutions... blows the doors off. Of course there will be guilty people among them. But if there is even one innocent soul among that 900 (and the evidence so far suggests there is a great deal more than one), the Post Office should be on its knees apologising to them and their families for the damage they have done.

Many years ago, when I was first looking at this story, a number of sensible editors would ask if I knew whether there was a significant uplift in the number of Subpostmasters prosecuted after the arrival of Horizon. Journalistically it was a key questions. If there was no uplift, then maybe Horizon wasn't the problem all the Subpostmasters were saying it was.

If there was an uplift, well... it might. Of course the Post Office would be able to explain it by saying it meant Horizon was instrumental in helping them identify the supposed criminality which was already out there, but it might also point to the start of where things started to go very wrong.

Finally, the answer to that decade-old question came on Friday.

For the first time the pre and post-Horizon prosecution figures are now public. 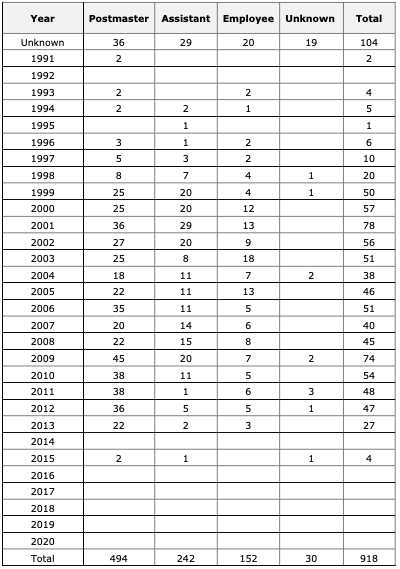 The answer to the question is yes, there was a significant uplift in prosecutions of Subpostmasters after the advent of Horizon. It went from an average of 3.6 Subpostmasters a year in the six years of available figures up to and including 1998 to an average of 29.8 a year in the six years after the introduction of Horizon in 1999. That is an eight-fold increase - or if you prefer it in percentage terms - 827%.

The only rational explanation for this is that the Post Office must have assumed that large numbers of its Subpostmasters were criminals, and at last, Horizon was helping catch them.

This perception that Subpostmasters are easily tempted criminals, combined with stupidity, a belief in the infallibility of computers, massively over-developed prosecutorial powers and a lack of independent scrutiny or oversight has resulted in a scandal you can now see from space.

I hope you are able to listen to The Great Post Office Trial, which starts on BBC Radio 4 today at 1.45pm and runs for ten episodes across two weeks. If you are reading this after the event, you can find all the episodes here after they have been broadcast.

**********************
This blog is entirely funded by donation. You can donate any amount through the secure payment portal I have set up for this purpose. If you contribute £20 or more you will be added to the secret email list. This alerts you to the latest developments on this story before they happen, as well as links to new articles and stories, whether posted here on this blog or elsewhere. Thank you for your support.
at May 25, 2020
Email ThisBlogThis!Share to TwitterShare to FacebookShare to Pinterest
Newer Posts Older Posts Home
Subscribe to: Posts (Atom)