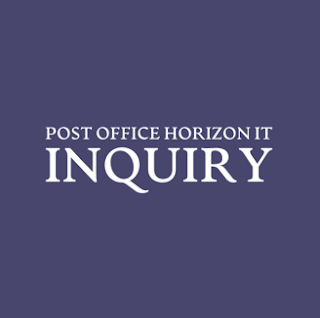 at August 27, 2021
Email ThisBlogThis!Share to TwitterShare to FacebookShare to Pinterest

The Metropolitan Police has confirmed that a man and a woman have been interviewed under caution on suspicion of perjury.

On 16 December 2019, at the conclusion of the Bates v Post Office litigation, the managing judge, Mr Justice Fraser, told the court he was so concerned about the evidence given in previous civil and criminal trials by a number of Fujitsu employees, he was passing confidential a file to the Director of Public Prosecutions, Max Hill.

On 20 January 2020, Mr Hill, who runs the Crown Prosecution Service, forwarded a letter from Mr Justice Fraser to the Metropolitan Police and an investigation was launched. The detective put in charge of the case was Detective Sergeant Hayley Broom from the Major Inquiries/Special Enquiry Team.

On 18 November last year, the names of two the former Fujitsu engineers under investigation were revealed in open court and reported on this website and widely in the media.

Now two people have been questioned.

Earlier this month, the journalist Tony Collins, who commissioned the very first investigation into the Post Office Horizon scandal for Computer Weekly, credited a Sunday Mirror piece which reported this latest development.

Yesterday, when I asked the Met press office if the Sunday Mirror piece (which does not appear to be available online) and Tony Collins' reporting of it was correct, I was told that "a man and a woman have been interviewed under caution on suspicion of perjury".

"Being given this statement is not a confirmation of any name or profession media may attribute, or wish to attribute. It is given on the basis of being asked for information on the incident, on the date stated and at the location stated."

The police investigation, prompted by Mr Justice Fraser's letter has now taken 17 months. No one has yet been charged.

Previous mistakes by the police and the media, privacy rules and contempt laws around live cases make it difficult to put hard information in the public domain. The closer the police get to charging anyone, the less I am allowed to report. The priority (perhaps ironically, given the nature of this scandal) is ensuring that if anyone is charged they have the opportunity of a fair trial.

On 26 July this year, Alan Bates said the Justice for Subpostmasters Alliance and a legal team from Howe and Co had met with the Director of Public Prosecutions and the Met Police. Bates told his members the police would not tell him what is going on:

"as it is an open case, but we did receive assurances about how seriously they are taking matters and how, despite the Judge only referring two names to them, they will go where the evidence takes them."

Last year, in a letter to Darren Jones MP, the former chief executive of the Post Office, Paula Vennells, told Mr Jones she was:

"aware that there have been calls for criminal proceedings against Post Office and against institutions and individuals who were responsible for or involved with the investigation and prosecution of sub-postmasters who were affected by the defects in Horizon. I wish to state for the record that I do not accept any personal criminal misconduct."

Paula Vennells was given a CBE for her services to the Post Office shortly before she left the organisation in early 2019. She had spent seven years as chief executive, during which time the average Subpostmaster pay had plummeted to unsustainable levels, the Post Office was in total institutional denial about (and, the evidence suggests, covered-up) its responsibility for dozens of miscarriages of justice, and she also authorised a litigation strategy which would see the organisation cease to be capable of operating as a going concern.

There have been calls by MPs and the Communications Workers Union for the Reverend Vennells to be stripped of her CBE. Now, according to the Daily Telegraph, the former Chairman of the Post Office, Alice Perkins is also in the frame.

The report (which is paywalled), reports government "sources" describing "plans to launch a review into honours awarded to people embroiled in the Horizon subpostmasters scandal."

This review "is expected to involve a list of names of figures involved being compiled, along with an assessment of the level of their involvement."

Vennells is named, as is Perkins: "the former chairman of the Post Office, who is married to Jack Straw, the former foreign secretary. She was made a Companion of the Order of the Bath in 2002."

Alwen "I have lived and breathed the business my whole life" Lyons, the Post Office's former company secretary, who was made an OBE in 2017, is not mentioned. She has a significant role in this scandal, according to information I hope to put in my forthcoming book.

The Daily Telegraph does not give any details of how this review of Post Office honours is going to function and what relationship it will have with the government's forfeiture committee. The forfeiture committee is the only body which has the power to recommend Her Majesty annul an honour, but it is not an investigative body, which means it relies on a complaint, and information supplied to it. It also, weirdly, is not obliged to publish its decisions.

The sort of information the forfeiture committee will consider is limited. According to its website, the committee: "reflects the findings of official investigations and makes a recommendation of whether or not the honours system has been brought into disrepute."

It seems as if this government "review", reported by the Daily Telegraph, could be classed as an "official investigation", though on what legal basis it is founded, what level of "review" will be carried out and what relationship the review is going to have to the statutory inquiry into the Post Office scandal has yet to be explained.

The Daily Telegraph's sources state the impetus for this review is coming from the Prime Minister and Robert Buckland, the Justice Secretary who are both apparently "very exercised" about the scandal.

I have asked the government for more information.

This blog is crowdfunded. I am also writing a book called The Great Post Office Scandal, which will be published by Bath Publishing in October 2021. If you would like to put a few quid in the tip jar (and join the "secret" email newsletter mailing list) or would like to buy a copy of the book, please click here.