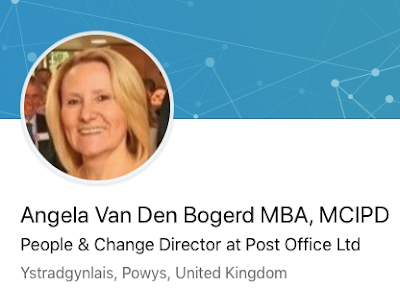 There were three Post Office witnesses being cross-examined in court today.

I have all their witness statements and will spend a very jolly couple of hours scanning and posting them up tonight. Forgive me if for the purposes of this report I focus on the latter witness. If you want to read what was said by Mrs Rimmer and Mr Breedon, please read my live tweets here.

There's no doubt there were many people very keen to hear what Mrs van den Bogerd had to say under cross-examination. Over many years many aggrieved Subpostmasters have come to see her as chief executive Paula Vennells' representative on earth, defining the Post Office's position to them, and to the small circle of independent professionals who have been involved with investigating the Horizon system and subsequent mediation.

This was established at the beginning of her evidence session during which she was asked if, much like Alan Bates has been campaigning on behalf of Subpostmasters for a long time, she has been involved in defending the Post Office's position with regard to matters relating to this litigation for a long time. She said she's been involved in investigating issues that arose out of Postmasters' concerns.

The dashing Mr Green, QC for the claimants, asked Mrs van den Bogerd to confirm she was the Post Office's most senior representative involved in the trial. She agreed.

How much Mrs van den Bogerd is her own woman and how much is operating under the advice or instruction of Paula Vennells, the Post Office board and Post Office's General Counsel will no doubt become clear eventually, but it's not at the moment. By way of example one of the first questions Mrs van den Bogerd was asked today was whether she was the author of a Post Office rebuttal document which was released after the Post Office had closed the mediation scheme and dismissed Second Sight in 2015. She said she wasn't the author, she had "input" into it.

What we do know is that Mrs van den Bogerd has been here for the duration of the trial and she follows proceedings closely. The Post Office legal team have given her an iPad which allows her to see all the documents being discussed in court. I have no such access and have to request these documents retrospectively, and even then, there's no guarantee I'll get them.

Around this point the judge asked Mrs van den Bogerd to slow down and speak up, which she did initially, and then became quieter and quieter as the hour progressed, which made things quite tough at times.

Mr Green highlighted the Post Office's assertion that lack of access to information after suspension had given rise to a prejudicial situation for a Subpostmaster.

Mrs van den Bogerd was given a hypothetical example of a £9K discrepancy arising at a branch, which a Subpostmaster finds at 7.30pm at night. They call the helpline, but don't get a call back. the next day the branch is audited, the discrepancy is found and the Postmaster is suspended on the spot. They no longer have access to their Horizon terminal, so would Mrs van den Bogerd accept it is now very difficult to find out how the discrepancy arose.

Mrs van den Bogerd accepted this hypothetical point, but said an audit would normally only take place if there were signs something was going wrong at a branch.

Mrs van den Bogerd agreed. Mr Green then came up with another hypothetical situation. What if a Subpostmaster received a Transaction Correction in error, which required them to put £10,000 of their own money into the till or safe to balance. Now - four months down the line - the error is realised and a positive Transaction Correction comes down the line and the Postmaster can take the £10K back out. Mr Green made the point that the Postmaster was therefore providing their own working capital to make the business function.

Mrs van den Bogerd had a lot of issues with this hypothetical situation, but accepted it could happen.

During the course of this exchange Mrs van den Bogerd said something I couldn't quite catch and Mr Green jumped on it.

He asked her to read back what she'd just said (there is a live transcription service provided by two women sitting in front of the judge who instantly post up anything anyone says in court comes up on the judge and lawyers' screens as they say it). They do so. Mr Green takes her through it and says:

Mr Green said that's the very point I've been trying to make today is that the Post Office doesn't make any distinction between losses for which they are liable, and any losses.

It was quite a theatrical moment, but Mr Green was clearly keen to highlight it. He reiterated the point that his example was one for which the Postmaster was not liable, and yet during her answer Mrs van den Bogerd said the Postmaster was liable for all losses.

He asked if Mrs van den Bogerd accepted that the Post Office habitually made no distinction between losses that Subpostmasters are contractually liable for and ANY losses.

I honestly couldn't quite hear Mrs van den Bogerd's response to this, but I think she said if a Postmaster is not responsible for a loss, they will not be held liable for it.

Mr Green developed his theory using the example of Post Office standard literature and letters sent to individual Subpostmasters which make it quite clear the Post Office is telling them they are definitely responsible for ANY losses incurred in their branch, when in fact they should be informing them that under the terms of their contract they are responsible for, "losses caused by their own negligence carelessness or error".

He asked about the letter to Pam Stubbs (a lead claimant) telling her she is responsible for any losses in her branch and demanding she pay the Post Office £9,000.

Could Mrs van den Bogerd "explain to my Lordship", why this incorrect phrase kept turning up in Post Office literature?

Mr Green suggested that the reason for the omission of the correct clause was because it made it far more likely that the Post Office would be able to take the money from the Postmaster it was being sent to.

Mrs van den Bogerd disagreed. Strongly. No, she said, the Postmaster would have been perfectly aware of their contractual responsibilities and could dispute it.

Mr Green brought up the Pam Stubbs letters. The first of which in early February 2011 was an email from a Post Office manager, telling her she would not be held liable for any debt whilst her situation was being investigated. Then he drew her attention to another letter written three days later saying Mrs Stubbs was liable for ANY losses in her branch, demanding £9K and then asking her to get her credit card and call the debt recovery team.

Mrs van den Bogerd said these are automated processes and that nothing had been put in the system by Post Office management about stopping Mrs Stubbs' debt demand letter being sent out.

Mr Green put the issue to Mrs van den Bogerd again. He said the letter in the way it is written, is a mis-statement of her contractual obligations and a demand for money which makes it more likely that the Subpostmaster will hand over their own money to cover the discrepnacy.

Mrs van den Bogerd said it was not a deliberate. It was a mistake. The judge is not clear. He wants clarification from Mrs van den Bogerd. Does she accept the statement of contractual obligation was a mis-statement? Yes she does.

Mr Green is then asked by the judge to ask his next question again - does Mrs van den Bogerd accept that the way it is stated is more like to get money out of the Subpostmaster? Or that if the contractual obligation were stated in precise terms, it wouldn't make any difference?

I think Mrs van den Bogerd said here that in this case [I couldn't really hear her precisely] no it wouldn't because in Pam Stubbs was disputing her discrepancy and she would have expected her to have had some kind of conversation with her manager about it so she knew what she needed to know.

Mr Green takes her to a letter to Pam Stubbs dated March 2011, still demanding money. Mr Green asks why this letter has been sent when the author of the email telling Mrs Stubbs he was going to suspend her liability while an investigation is going on has now sent two letters demanding repayment.

"It's a mistake." says Mrs van den Bogerd "I know how they work."

And that was it from Mrs van den Bogerd. Other interesting bites from today included Mr Green either making a point he was always going to make or picking up on something from Naushad Abdulla's evidence when speaking to Mrs Rimmer. In the summary of terms sent to Postmasters which they sign and return after being offered the job (they say in lieu of seeing a contract, the Post Office say along with the full 114 page contract), Mr Abdulla pointed out a note saying that none of these terms can be relied on for any purpose. Today Mr Green noted a clause which said "“for use as as guide only. POL will in no way held responsible for action taken as a result of this summary."

With John Breedon Mr Green hammered the point about the misquoting of section 12:12 to occlude the clause "negligence, carelessness or error" and again going hard on the lack of access to information about their suspension that a Subpostmaster has compared to the Post Office, both in terms of why they have been suspended and investigating what might have caused discrepancies in branches (both pre- and post-suspension).

Mr Green also raised a very interesting point with Mr Breedon from an internal Post Office guidance document when discussing whether or not to suspend someone. The last point to weigh up is their "willingness to make good the loss", suggesting that if a Subpostmaster was disputing a discrepancy as not their liability, it militated against them in the decision whether or not to suspend them.

So there you have it. Key points as discussed today. For the full blow-by-blow read the live tweets post.

We are going to reconvene tomorrow at 10.30am for more evidence from Mrs van den Bogerd. I will attempt to sit closer to her so I can hear more of what she says.

If you are enjoying these reports and updates please do chuck some money in the tip jar.