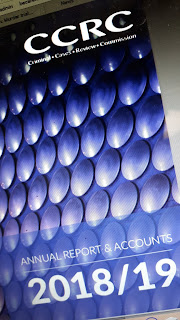 The Criminal Cases Review Commission (CCRC) has blamed the Post Office's attempt to get a High Court judge booted off the Bates v Post Office litigation as a reason for its continued inability to make a decision on 35 potential miscarriages of justice it has under review.

The CCRC has devoted a section of its latest annual report to what it calls "Post Office 'Horizon computer' cases" involving "former Sub-Postmasters/mistresses convicted of offences such as theft and false accounting, having been prosecuted by the Post Office."

The CCRC blames the latest delay on the Post Office, saying it needed to take into account the outcome of the Horizon trial, the second trial in the litigation, "on the basis that that second set of proceedings appeared on the face of it to be the most relevant to the Horizon applications under review."

But it couldn't take the Horizon trial into account by the time the report was published, because it hadn't finished yet: "caused by an application by lawyers for the Post Office attempting to have the judge recuse himself from those proceedings".

Why they are waiting

In the general scheme of things it's Just Another Delay. Last summer, after stewing on their cases for three years, the CCRC sent letters to the Post Office 35 telling them a decision would be made about whether or not their cases would be referred to the Court of Appeal in the Autumn of 2018. This struck me as insane. The first trial in Bates v Post Office was just about to start. The vast majority of people whose cases the CCRC was reviewing were litigants. The CCRC was about to do something which would have significant and serious implications without taking any account of the evidence which was about to be aired in the High Court.

When the trial started, it became apparent to anyone with a passing interest in potential miscarriages of justice that what was coming out of Court 26 at the Rolls Building was directly relevant. Thankfully the CCRC saw sense and, as it says in its report:


"In December 2018 the Commission informed the applicants in these cases that we had decided it was necessary for us to wait for the first judgment of the High Court in Group Litigation against the Post Office by more than five hundred former Sub-Postmasters (the judgment in the ‘Common Issues’ trial) before making any decisions in the Horizon cases under review."

This was bittersweet for many claimants who have had their lives on hold, some of them for more than a decade, as they campaign to clear their names. Most I spoke to agreed it made sense, whilst pointedly wondering how much longer this could all take.

It's interesting to read the language the commission uses in its report to describe the cohort of Subpostmaster cases, because it gives an indication of how well it understands them. According to the CCRC, the "theme" of the cases is a "suggestion that problems with the ‘Horizon’ computer system and/or with the training and support provided in using the system were the cause of cash shortfalls in the Post Office branches in question, which in turn led to the convictions."

This suggests the CCRC understands innocent Subpostmasters could have been prosecuted for:

b) incorrectly using a properly functioning Horizon terminal because they had not been given the correct training beforehand and/or support when things started going wrong.

This reflects a shift in understanding many of us following this story have been through: it's not just about the computer system. It's about the possibility that the Post Office may have prosecuted innocent people for nothing worse than making mistakes - something the Post Office denies. For a theft, false accounting or fraud charge to stick, there has to be criminal intent, something conspicuous by its apparent absence from the evidence I've seen in the cases I've reported.

The CCRC's annual report finishes its section on the cases it has under review by stating: "We are acutely aware of the need to ensure that relevant matters from the High Court proceedings are considered in the review of the applications to the CCRC, and will be paying close attention as matters continue to unfold. We will keep our applicants informed of our approach in this regard."

If I were an applicant, I would not be holding my breath for a decision any time soon.

You can read the CCRC's annual report here in full. My thanks to secret emailer Wendy for alerting me to its existence. I am reliant on correspondents to alert me to stories. Please do either join the secret email gang (see below for more information) or send me a message via the contact form situated on the right hand nav bar of this website. Many thanks!

*************************
If you can, please help keep this crowdfunded public-interest journalism project going by chucking a few quid in the tip jar below. Contributors who give £20 or more will start receiving regular "secret" emails which have all the info and gossip about this litigation as it makes its way through the courts. Click here to see how and where your money is being spent.
at July 24, 2019
Email ThisBlogThis!Share to TwitterShare to FacebookShare to Pinterest
Newer Post Older Post Home