It's all over - parties agree a resolution through mediation 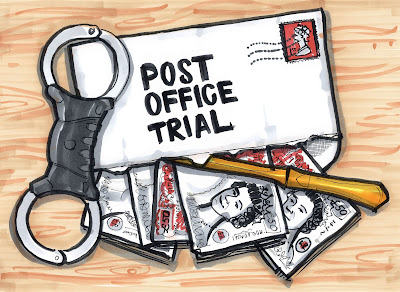 "The Parties to the Group Litigation in Bates v Post Office are pleased to report that they have reached a comprehensive resolution to their long-running litigation in the High Court, following several days of respectful, challenging, and ultimately successful mediation during which the parties engaged with each other in good faith.

The Post Office would like to express its gratitude to claimants, and particularly those who attended the mediation in person to share their experiences with us, for holding us to account in circumstances where, in the past, we have fallen short and we apologise to those affected.

The Post Office is committed to applying the lessons it has learnt. Its new Chief Executive Officer, who joined in September and led this drive to a mediated resolution, is undertaking an ambitious and sustained programme of changes to the Post Office’s relationship with postmasters whose role we recognise as being core to our future success. We look forward to working in genuine partnership with postmasters to seize the opportunities ahead of us and to continue to serve communities across the country.


“We are grateful to the claimants for taking part in this mediation and agreeing a settlement, bringing the Group Litigation to a close.  I am grateful to Nick Read for his important engagement in the mediation process.  We accept that, in the past, we got things wrong in our dealings with a number of postmasters and we look forward to moving ahead now, with our new CEO currently leading a major overhaul of our engagement and relationship with postmasters.”


“I am very pleased we have been able to find a resolution to this longstanding dispute. Our business needs to take on board some important lessons about the way we work with postmasters, and I am determined that it will do so.

We are committed to a reset in our relationship with postmasters, placing them alongside our customers at the centre of our business. As we agree to close this difficult chapter, we look forward to continuing the hard work ahead of us in shaping a modern and dynamic Post Office, serving customers in a genuine commercial partnership with postmasters, for the benefit of communities across the UK.”


“The Steering Committee would like to thank Nick Read, the new CEO of Post Office, for his leadership, engagement and determination in helping to reach a settlement of this long running dispute.  During the mediation, it became clear that he intends to reset the relationship between the Post Office and its Subpostmasters and put in place new processes and support for them, as part of a wider programme of improvements.

It would seem that from the positive discussions with Post Office’s new CEO, Nick Read, that there is a genuine desire to move on from these legacy issues and learn lessons from the past.”

James (now Lord) Arbuthnot, whilst MP for North East Hampshire, brought a considerable amount of parliamentary pressure on the Post Office in the years leading up to this litigation. He has responded to this morning's news, saying:


"I’m thankful to hear that mediation has finally been successful.  We couldn’t go on as we were, with many millions of pounds being squandered on fighting about something that should have been resolved much earlier.
We will all need to consider the detail of the results of the mediation to see what remains unresolved.  I do hope we are not (as has been all too usual in this saga) inhibited by gagging clauses.  Where does this leave, for example, the consideration by the Criminal Cases Review Commission?  How does it leave those who have been convicted of, or who were persuaded to plead guilty on the basis of incomplete or misleading evidence to, crimes such as false accounting or even fraud?  How are those sub-postmasters who are not parties to the litigation affected?  I shall look forward to the answers to these and many more questions as details begin to emerge.”

The parties first went into mediation on Wed 26 November. Two weeks later they have a settlement.

Back in August Alan Bates was wary of mediation, having sent a circular to fellow claimants and members of the Justice for Subpostmasters Alliance stating:

"There could well be an optimum time when attending mediation might be in the Group’s best interests. But it certainly isn’t before the Horizon judgment is released..."


"To start with, POL [Post Office Ltd] still refuses to accept it has done anything wrong, otherwise it wouldn’t have applied to the Court of Appeal to overturn the findings by the Court of the Common Issues judgment. To go to mediation immediately would mean we could find ourselves in the same position we were in at the end of the Initial Complaint Review and Mediation Scheme where, as a number of you will recall, POL turned up at mediation meetings, stated it had done nothing wrong and stated it was ‘all your fault’."

When I spoke to him about it Alan Bates was clear three things needed to be on the table for the claimants to even consider a settlement. They were:

a) realistic compensation (ie pots and pots of cash).
b) a proper apology.
c) a solution to the criminalised cohort of claimant Subpostmasters whose cases are being reviewed by the Criminal Cases Review Commission.

As you can see from the statement above, there has been an apology. Whether a more fulsome one will follow, or if that's it, who knows.

In case anyone's wondering, the Horizon judgment will still be handed down at 2pm on Monday 16 December by the managing judge. That's about £10m worth of legal fees and a serious amount of time and brainpower expended by a capable judge on what is now something of a non-story. Such is life. Further thoughts and questions here.
at December 11, 2019
Email ThisBlogThis!Share to TwitterShare to FacebookShare to Pinterest
Newer Post Older Post Home