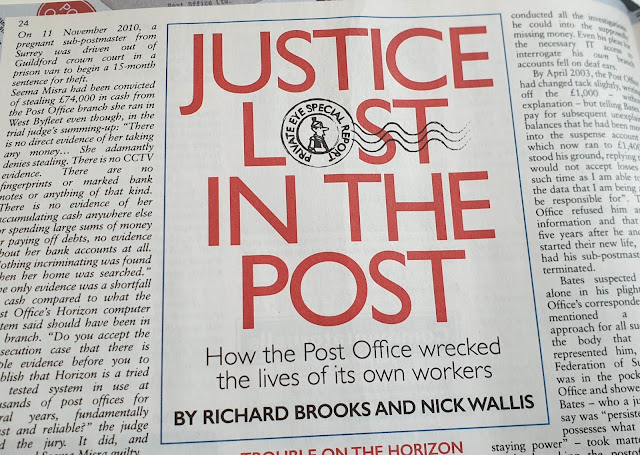 If you get a chance to go to the shops this week, please look out for Private Eye magazine, which carries an investigation into the Post Office Horizon scandal. The six-page report (starting on p24) includes some pretty harrowing content, including the first public telling of Martin Griffiths' story, the Subpostmaster who, after being hounded by the Post Office for inexplicable losses, ended his life. 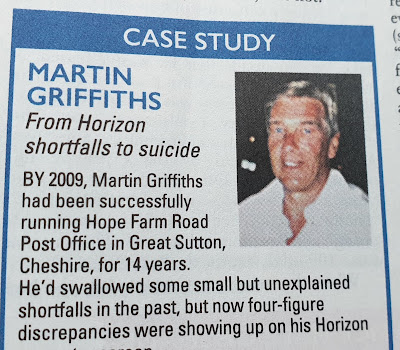 There is also a rogues gallery of those responsible:

I wrote the report with Eye staffer Richard Brooks who I took the story to back in 2011. Richard has produced some brilliant work down the years and it is great he is getting byline recognition for this piece.

I am also extremely grateful to everyone who has ever given me any information about this story, particularly those who have given me permission to write about their personal situations. I realise it can be difficult.

This week's magazine also has lots of useful information on the coronavirus, and just so you know what you're looking for, the front cover looks like this (see left).

I realise going out to the shops can feel a bit like the scene in the 1981 BBC adaptation of Day of the Triffids (when the blinded protagonists have to try to retrieve a cabbage from a nearby allotment or face starvation as the alien vegetable overlords attack. Not that I'm still scarred by those images. No sir...), but if you are unable to get to the shops, why not subscribe to Private Eye? It is a great rag and a consistent support of investigative journalism. If you specify you want to start with this week's issue (Eye 1519), hopefully they will be of some assistance. They also have a six-issue half-price deal going at the moment.