A serving Subpostmaster writes: "They have no concern for the postmasters whose lives they have ruined" 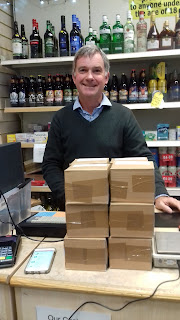 I mentioned I was keen to keep this blog moving between trials and asked for anyone with an interesting take on this litigation to get in touch.

Chris (pictured left) did just that. He is a serving Postmaster. He has asked me not to name his post office, but he is happy for me to print his name and the other details.

"I am a subpostmaster from South West England having taken on a Post Office together with a Royal Mail Sorting Office for seven postmen in 2003.

During the last fifteen years I have also added three outreach locations where I take a portable Horizon kit to a few village halls or shops.

I have been fortunate not to encounter some of the problems that the claimants have experienced. However whilst I enjoy serving our customers, my heart is no longer in this job.

In 2015 my wife and I tried to leave under the Network Transformation scheme but surprise, nobody wanted to take the job on.  In 2016 the Post Office basically said that if we wanted any compensation monies we needed to transfer to the new contract before the Government funding ceased.

So having completed a business plan, which I had to keep changing until they were happy with the figures (so much so it was nothing like what the actual plan would be), we transferred in Nov 2016.

Having previously worked for NatWest (with my wife) we had to take our pensions early to make up for the loss of income. We basically pay ourselves about £4 per hour because that is all the business can afford. We paid £100,000 for the lease in 2003. If we could find a buyer for the business now, we would probably be lucky to get £5,000.

Whilst I have not experienced the terrible situations of the claimants, I too feel that I have been stitched up by the Post Office. I have been resigned to the fact that I will probably be the last  postmaster in the town and it is only a matter of time before I close the office.

A former PO Contracts Manager came into my office today and I asked her if she was following the trial. She replied that she had lost track of it, but was concerned that some of the former postmasters who HAD defrauded the Post Office may jump on the bandwagon. I thought after she had gone, that her statement typifies the Post Office. They have no concern for the postmasters whose lives they have ruined.

Is it any surprise I want to leave a job which up to recently I enjoyed?"