Trying to hold the government to account for its actions 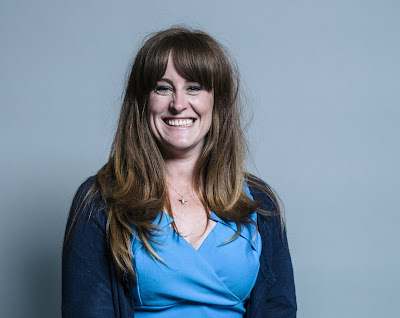 The Business, Energy and Industrial Strategy (BEIS) select committee inquiry into the Post Office network had another evidence session today, with the Minister for Postal Services Kelly Tolhurst (pictured above) in the hot seat.

The session itself was televised on parliamentlive.tv (see it here) and the transcript will be up on parliament.uk in a few days, but I thought it would be worth attending. The litigation which poses an "existential threat" to the Post Office's existence wasn't mentioned.

After the session Tom Witherow from the Daily Mail buttonholed Ms Tolhurst, and while I was waiting my turn, I introduced myself to Tom Cooper. Mr Cooper is a senior civil servant - a director, in fact, of UK Government Investments at BEIS. During her evidence Ms Tolhurst told the committee Mr Cooper sits as a non-executive director on the Post Office board. Today he was sitting on her left.

I told Mr Cooper who I was and that I was following the litigation at the High Court. He smiled and said "and we're following you!"

I asked what the government strategy was if the claimants won. Mr Cooper looked as if he was about to say something interesting when another civil servant, Carl Creswell, his BEIS colleague (sitting on Ms Tolhurst's right during the evidence session) leaped in to say that due to commercial confidentiality it wasn't really something they could discuss.

I pushed the issue and suggested that someone had to be planning for an outcome where the litigants did win as the sums at stake were potentially huge.

Mr Cooper again wasn't going to comment, then said "Well you've seen the annual report from last year and it remains the case that the claimants haven't actually said what they want. So we don't know whether it's a big number or not."

I reminded him that on the steps of the court, on the record, James Hartley from Freeths said this litigation could cost the Post Office hundreds of millions of pounds.

Mr Cooper said that no sums of that nature had been mentioned in court, which I think is true. But it's not the point - something I was about to volunteer when Mr Creswell politely terminated our conversation.

I waited for the minister. Ms Tolhurst was the embodiment of geniality, but would not be drawn on any aspect of the litigation.

I asked her straight up: "What happens if the Post Office loses?"

"I can't really go into the litigation stuff." she said "I'm not being evasive. I can't speak to you about it."

I raised the theoretical point - if the Post Office does lose - would the government bail it out or let it trade insolvent?

Ms Tolhurst would not be drawn. She said it was both confidential and a live court case and wouldn't "get into theoretical-based outcomes of the litigation." She suggested that when she did have something to say she would be more than happy to share it.

I took another tack. Is the government supporting the Post Office in their litigation?

I wondered if, as its sole shareholder, the government was interested in what its commercial entity was up to?

Again she repeated that the litigation was a matter for the Post Office. I told her I was in court when David Cavender QC asked the judge for extra time to make a costs payment to the claimants on the basis that "it is a question of arranging the funds... and talking to our shareholder about it."

That's when Ms Tolhurst replied with something quite interesting. She told me there were conversations going on between the Post Office, civil servants and the ministry but it was not something she was prepared to say anything more about. At that point one of her advisors brought our conversation to a close.

As we parted company Ms Tolhurst smiled and reiterated her desire to let me know when she did have something to say about the litigation, and off she went.

I think from the above exchanges, what's been said in court, and the fact there is a BEIS civil servant sitting on the board of the Post Office, it is safe to say the government is taking an active part in the Post Office's decision-making process with regard to this litigation.

Putting it a different way, it would be borderline insane if the government wasn't all over the Post Office litigation strategy and doing some heavy thinking about preparing for a hellishly expensive outcome.

However, it is virtually impossible to hold ministers or civil servants to account on exactly what they are doing in our name, with our money, because when you try, you get told the Post Office is an arms-length organisation or it is an issue of commercial confidentiality or off-limits because there's a live trial going on.

This wouldn't be so bad if the Post Office was happy to explain its past actions and/or current strategy, but of course it isn't. The Post Office has famously refused to talk about matters which led to the group litigation and has continued to avoid giving interviews since.

This sucks. The government and a publicly-owned company are colluding to spend millions of pounds aggressively litigating a massive court case they show every sign of losing. Yet they are refusing to say anything about it to the people whose money they are spending.

Oh well. If anyone from government or the Post Office changes their mind, they know where to find me.

If you can, please help keep this crowdfunded public-interest journalism project going by chucking a few quid in the tip jar below. Contributors who give £20 or more will start receiving regular "secret" emails which have all the info and gossip about this litigation as it makes its way through the courts. Click here to see how and where your money is being spent.
If you want to find out a little bit more about the underlying story, click here.
at June 25, 2019
Email ThisBlogThis!Share to TwitterShare to FacebookShare to Pinterest
Newer Post Older Post Home