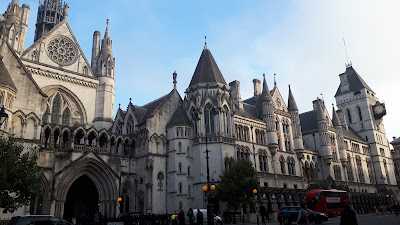 The thought expressed by Lord Justice Holroyde in the title to this post at the Court of Appeal on 17 December 2020, could have a huge bearing on whether we will get any closer to understanding the Post Office's behaviour in prosecuting so many people using Horizon IT evidence.

Evidence from the Post Office's Horizon IT system was used in around 900 prosecutions between 1999 and 2013. Last year, 41 people were referred to the Court of Appeal by the Criminal Cases Review Commission. The CCRC contended their convictions were unsafe because the Post Office had engaged in abuse of process through (category 1) lack of disclosure and (category 2) prosecuting people who should never have been prosecuted in the first place. This latter misdemeanor is known as "an affront to the public conscience" and is very serious.

With four Subpostmasters, the Post Office accepted both category 1 and 2 abuse of process had taken place, including in the case of Noel Thomas, one of the founders of the Justice for Subpostmasters Alliance, who spent his 60th birthday in prison.

For the remainder, the Post Office did not accept the category 2 argument. These cases included Seema Misra, Tracy Felstead and Janet Skinner, (who, like Noel, had all been given prison sentences). In three of the 41 cases the Post Office is contesting both categories.

For all the Subpostmaster cases where the Post Office is not contesting category 1, the quashing of these convictions at the Court of Appeal at the end of this month is likely a formality.

But Seema, Tracy and Janet felt this would allow the Post Office to get away with a far more serious charge - that the Post Office's investigators and prosecution team took people to court knowing the evidence they had against them was flawed to the point of being unreliable.

And so they approached the Court of Appeal seeking to have both categories of abuse against the Post Office made out.

As their QC, Lisa Busch, said in court:

"for us it's not merely a question of unsafe convictions; it's a matter of prosecutions that should never have been brought."

Some other Subpostmasters were concerned that arguing category 2 could add delay and expense to a process which had lasted long enough already. Some took the view that the primary goal was getting their convictions quashed, and fighting over the reason behind their prosecutions would be a waste of time, especially as it could slow down the process of seeking compensation in the civil courts.

Seema, Tracy and Janet felt differently. They wanted the Post Office's behaviour fully exposed, feeling that (if they won) it could bolster their claims for compensation and help the Subpostmasters coming after them.

The risk was if they lost the second category argument, it could reduce the scale of civil compensation claims and make things harder for those coming through. As I reported back in October this caused some degree of consternation.

The Court of Appeal hearing on 17 December was to decide if any of the appellants:

a)  had the right to fight for category 2 abuse if the Post Office's concession on category 1 made quashing their convictions a formality and,

b) if they didn't have the right, should the court allow them to argue it anyway?

Early on in the hearing it became clear the appellants had no right in law to argue category 2, so it was a decision for the court.

As you will see from the transcript below, the representatives of the other 31 Subpostmasters took various stances on their clients' claim to argue category 2. A couple were with the Post Office, saying it was unnecessary. Others sat on the fence, saying that if the court was going to allow it, their clients would like the opportunity of arguing it. Other representatives articulated nuanced variations on those positions. It is interesting to note that the Attorney General has now got involved, and sent a QC (Mr Mably) to advise the court.

No documents. No dice.

From a public-interest perspective, considering "who in the Post Office knew what when" is hugely important. So far, no one from the Post Office has volunteered an explanation.

We don't know why decisions were taken to prosecute certain Subpostmasters, why they hushed up the Clarke Advice, or the results of the CK Sift Review.

Sir Wyn Williams' inquiry into the Post Office Horizon scandal cannot compel anyone to explain anything, nor order the disclosure of documents which may shed light on the matter. An open court process is currently the best chance anyone has of getting this information into the public domain.

But I'm not holding my breath. As documented here, the court had already refused to disclose the Clarke Advice to me on 3 Dec. On 17 Dec, as you will see from the transcript, Tom Witherow from the Daily Mail had a go. I also made a verbal request to the court to have sight of all the parties skeleton arguments for the hearing, a formality in every other court case I have attended.

The court refused Mr Witherow's request, even though the Post Office said it had no objection to me or Mr Witherow seeing the Clarke Advice. The judges then went one further by refusing to order I should have access to the parties' skeleton arguments, despite there being no objection from any of the parties involved.

I then went back to the court, asking it to make clear it had no objection to me receiving the skeleton arguments if the parties were willing to hand them over (which I understood most of them were, with clarification from the court). The court declined.

The net effect was that I was not given sight of the parties skeleton arguments, which I think goes against established precedent and open justice.

At the end of the 17 Dec hearing the judges decided they would allow any Subpostmaster who wanted to the chance to argue category 2 abuse. The ruling can be read here as it doesn't form any part of the transcript below.

I would give the transcript your time, though, as it is a fascinating piece of legal argument, taking in the cases under discussion, wider points about the interests and administration of justice and the public interest in trying to report it.

Lisa Busch made persuasive arguments on behalf of Seema, Tracy and Janet. We'll find out whether anything more about "who knew what when" will come to light when the full hearing begins on 22 March.

I am grateful to the Post Office for agreeing to supply me with transcripts for all the Court of Appeal and Southwark Crown Court appeal hearings.

I am currently running a crowdfunding campaign to ensure I can attend all relevant appeal court, high court and government inquiry hearings related to the Post Office Horizon IT scandal. Reward levels include access to the secret email, and a forthcoming book. Please click here for more information, if you would like to support my work.