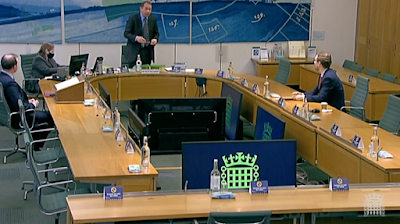 A fifty-minute Westminster Hall debate took place in the Boothroyd Room at Portcullis House (above) this morning, secured by Darren Jones, the chair of the BEIS select committee. Last year Mr Jones' committee began, then suspended, its investigation into the Horizon scandal.

This change in the law reversed section 69(1) of the Criminal Evidence Act 1984 which, until its repeal, meant that a computer-derived document couldn’t be used as evidence, unless it could be shown that at all material times the computer was operating properly.

This change is one of the contributory factors to the scandal. As Mr Jones said:

"If the Post Office had been required to prove its computer system was operating reliably, it would not have been able to do so, because we now know it wasn’t."

Section 69(1) was repealed because proving that anything with a chip in it was functioning correctly was becoming a massive problem for the courts. Removing the requirement to do so was a catastrophically short-sighted move. As Mr Jones said today:

"If people found it difficult to prove a computer was operating reliably in the early 1990s, we can only imagine how difficult it might be to do that today, with the likes of machine learning algorithms coming to conclusions for reasons even the computer programmer doesn’t understand."

Mr Jones wants the Law Commission to look at this immediately. Such urgency is long overdue. The barrister Stephen Mason (acknowledged by Mr Jones for his assistance) has been pointing out the absurdity (and real danger) of the 1999 legal assumption for almost as long as it has been in place. I first interviewed him on the subject in 2013.

During the response to Mr Jones' speech, Matt Warman, junior minister at the DCMS, touched at some length on Horizon IT scandal. It serves as a useful note of the government's current position on various matters, including the Historical Shortfall Scheme, the court of appeal hearings, Sir Wyn Williams inquiry, and the issue of financial redress for Subpostmasters.

Here is what he said on the issue of Horizon in full:

"The government recognises that the Horizon dispute has had a hugely damaging effect on the lives of effected postmasters and their families.

Its repercussions are still being felt today. And over the years, the Horizon accounting system recorded shortfalls in cash in branches, and the Post Office, at the time, believed these shortfalls were caused by postmasters. And this led to dismissals, the recovery of losses, and in some cases, criminal prosecutions.

And I know that many honourable members myself included have listened to the stories of those postmasters who were affected and been deeply moved by the impact on their livelihoods, their finances, and often their health as well.

A group of 555 of these postmasters led by former postmaster, Alan Bates, brought a group litigation claim against the Post Office in 2017. And it's clear from the findings of Mr. Justice Fraser, just how wrong Post Office was in its relationship with postmasters and that there were clear failings in the Horizon system.

So as I'll go on to explain the government is taking steps through an independent inquiry to ensure that lessons are learned and a full analysis takes place. The Post Office has reached a full and final settlement with the claimants in the group litigation in December 2019 and apologised for its failings. That settlement was an important step towards addressing the wrongs of the past, but it was only the start of a long journey for the Post Office to repair and to strengthen their relationship with postmasters.

As part of the settlement, the Post Office agreed to set up the Historical Shortfall Scheme and the scheme was open to current and former postmasters who may have experienced and repaid Horizon shortfalls, but did not participate in the group litigation. It's therefore an important step in making sure that all those who were affected have the opportunity to seek resolution.

But there are a number of postmasters with criminal convictions who have applied to the Criminal Cases Review Commission to have their cases referred for appeal. And the commission has referred 51 cases to date to either the court of appeal or the crown court. The government welcomes the decision made by the crown court in December 2020 to overturn six of these convictions.

However, a number of cases still to be heard in the relevant appeal court will be heard at the end of March - 42 in total. It would not be appropriate for the government to comment on these cases while they're still being considered by the courts, but I can assure honourable members that the Post Office is cooperating with the commission to the fullest extent.

More broadly, we must ensure that a situation like this can never be allowed to occur again. And that's why in September 2020, the government launched the Post Office Horizon IT inquiry, an independent inquiry led by Sir Wyn Williams, and Sir Wyn's inquiry will work to fully understand what happened, to gather available evidence, and ensure lessons have been learned so that this can't occur again.

And it will look specifically at whether the Historical Shortfall Scheme is being properly delivered and the government looks forward to receiving that report in the summer."

On the issue of referring the 1999 rule about IT to the Law Commission, Mr Warman said he would look at Mr Jones' suggestion, but hinted it was unlikely. He did, however say that after the forthcoming court of appeal hearing: "the judiciary criminal procedure rule committee could consider making changes... [and] I look forward to taking the matter up with the Ministry of Justice and the Lord Chief Justice."

You can watch the full debate on parliament.tv here.

I am currently running a crowdfunding campaign to ensure I can attend all relevant appeal court, high court and government inquiry hearings related to the Post Office Horizon IT scandal. Reward levels include access to the secret email, and a forthcoming book. Please click here for more information, and if you would like to support my work.